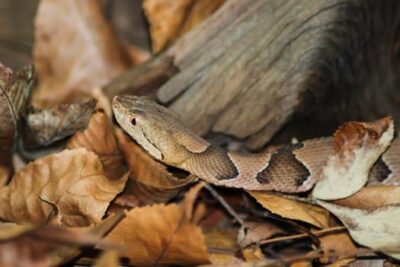 Most snakes spend their days hiding out, avoiding predators and over-exposure to the sun’s rays. Even venomous and dangerous snakes, such as the copperhead, are no exception to this rule.

Copperhead snakes like to camouflage themselves in piles of leaves, in trees, and under rocks. This can make a Copperhead very difficult to see, enabling it to avoid dangerous predators and other threats.

The copperhead is the most common venomous snake in the United States, and it uses its coloration to hide its location extremely well. So, you have to be very careful that you don’t accidentally tread on one of these snakes.

Where Do Copperheads Live?

Copperhead snakes are very adaptable and can thrive in a variety of locations. This is because there are five subspecies of the copperhead. The varieties of Copperhead that you may encounter include:

As you see from the states that these snakes settle in, they adapt to different climates. As a rule, a copperhead will follow its food source, namely rodents and small mammals.

This means that they prefer to dwell in wooded areas and forests. Copperheads love to hide in rotten wood and leaf piles, which is possible in such locations. Not only will this protect the snake from predators, but it enables them to ambush prey.

This does not mean you can become complacent if you live away from the woods, however. Copperheads are semi-aquatic, which means they are also found in coastal regions.

These snakes also eat lizards and amphibians, so they may settle close to a water source. Copperheads can also survive, and even thrive, in arid desert conditions. In such a location, copperheads will be wary of the sun and hide under rocks.

Are Copperheads Active During the Day?

Copperhead snakes are usually diurnal, meaning they are active during the day and sleep at night. This snake will hide and bask all day, soaking up the sun’s heat. This will give them enough warmth to find a hiding place to sleep for the night.

However, if the copperhead in question is based in a hot territory, it may change its schedule. Snakes that live in the desert tend to become nocturnal as an act of self-preservation.

It’s too hot to be active while the sun is beating down, even for the cold-blooded animals. The same also applies to very hot summers in other territories. Copperheads will hide out during the day in such climates, and hunt by night instead.

You will never see a copperhead at any time of day or night between October and March. This is the snake’s brumation season, so they will be well hidden from aspiring predators.

Copperheads are masters of disguise. They love hiding and will often be invisible to the eye unless we are looking intently. There are many different places that you’ll find these snakes:

If you have any reason to suspect that a copperhead may be nearby, be careful. These snakes will bite if they feel threatened. Accidentally stepping on a snake is the kind of event that could provoke such a response.

This depends on which sub-species of Copperhead you are referring to. Copperheads have heads that resemble copper. Each sub-breed also has other shades and colors to their bodies.

Regardless of the subspecies, most Copperheads will be between 2 and 3 feet long. Females are longer than males, but males are heavier and bulkier. All Copperheads have stout bodies and retractable fangs. Baby Copperheads are always lighter in color and have yellow tails.

If a Copperhead doesn’t want to be found, it usually won’t be due to its camouflage. These snakes choose their hiding spots carefully. You are more likely to encounter one entirely by accident. This can happen if you happen to disturb its habitat, or hiding place.

MLA Style: Carter, Lou. “Where Do Copperheads Hide During the Day?” Snakes For Pets, (February 15, 2020), https://www.snakesforpets.com/where-do-copperheads-hide-during-the-day/.