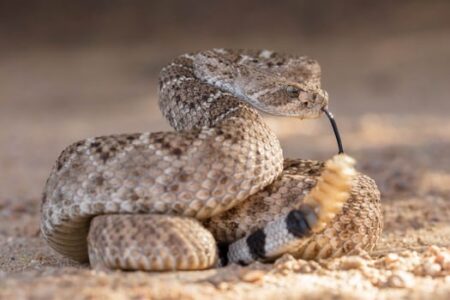 Some snakes vibrate their tail rapidly as a defensive response to a threat. That’s why a snake’s rattle is studied more extensively than any of its other anatomical features. While rattlesnakes are the most common group of snakes that vibrate their tails, they aren’t the only species.

Other snake groups, especially ones in the Colubridae and Viperidae families are known to shake their tails just like a rattlesnake. Venomous pit vipers, such as copperheads, cottonmouths, bushmasters, tercipelos, and cantils may exhibit tail vibration when threatened. Non-venomous snakes that shake their tails include, kingsnakes, rat snakes, gopher snakes, and corn snakes.

Why Do Snakes Rattle Their Tails?

Some snakes vibrate their tails rapidly when they feel threatened or scared. According to The Quarterly Review of Biology, tail vibration is common among New World species of Colubridae and Viperidae.

Many researchers believe that tail vibration may primarily serve as an auditory warning signal, like the growling of a bear. Others suggest that tail shaking may serve as a diversion, especially among non-venomous snake species. The shaking tail may draw the attention away from the snake’s vulnerable body parts, such as the head, and towards the tail.

Pit Vipers that Shake their Tails

Although these snakes don’t have rattles, they can produce a similar buzz when they vibrate their tails. Rattles in rattlesnakes are keratin segments that fit loosely inside one another at the end of the tail. When these segments knock against each other while the tail is shaken vertically, they produce the characteristic buzzing sound of a rattlesnake’s tail.

Bushmasters are the world’s largest pit vipers that shake their tails. They have evolved to have spine-like scales at the end of their tails that facilitate tail vibration and create a louder buzz compared to tails without spines.

Copperheads are another species of snakes that don’t have rattles, but can be mistaken for rattlesnakes because of their tail vibrating behavior. When it feels threatened, the cottonmouth will rapidly shake its tail and strike out in defense. The sound of the shaking tail in dry leaves can make most humans think that it’s a dangerous rattlesnake.

Colubrids that Shake their Tails

Colubridae, or colubrids, is the largest snake family in the world. These snakes are largely non-venomous, or possess venom that isn’t deadly to humans. Colubrids that rattle their tails include:

Tail vibration among non-venomous snakes may be as a result of Batesian mimicry to protect themselves from predators.

Colubrid snakes don’t have rattles at the base of their tails. However, they’re capable of shaking their tails vigorously against a surface, such as a pile of leaves, to imitate a rattlesnake’s buzzing tail.

Because colubrids are non-venomous, they heavily rely on other methods of self-defense. Mimicking the rattling sound produced by the venomous rattlesnake can help discourage a predator from attacking it.

New snake handlers may be alarmed to see their non-venomous snake behaving like a rattlesnake. However, this behavior is harmless and is often used if a snake is feeling stressed, agitated or threatened.

However, the Batesian mimicry theory doesn’t apply to all snakes, especially some Old World non-venomous snakes, such as rat snakes. Rattlesnakes are a New World species of snakes so there’s no way rat snakes could have learned this behavior from them.

Moreover, ancestral snakes have been known to silently shake their tails before rattlesnakes evolved to produce a buzzing rattle. Whether a colubrid is mimicking the venomous rattlesnake, or is continuing its ancestral behavior, tail vibration is most likely a method of self-defense against potential predators.

Tail Vibration as a Distraction

The Journal of Herpetology states that there are 76 species of snakes that shake their tails as a response to stress or as an antipredator strategy. The 1973 study shows that the goals of tail vibration are all defensive.

Researchers studied the injuries on the tails of 52 Eryx johnii, 63 Calabaria reinhardtii, and 156 pipe snakes. The unusual bluntness of their tails and the injury data for these snakes shows that these snakes use misdirection as an essential part of self-defense.

A snake may rattle its tail vigorously to divert the predator’s attention away from its head and towards its less vulnerable tail. Although this increases the snake’s risk of having tail-related injuries, it still keeps it from being killed or eaten.

Misdirection was also seen as an important function among brightly-colored species of snakes. Their bright tails, coupled with their rattling, might serve as powerful intimidating tools or warning signals to keep predators away.

According to the journal, Animal Behavior, tail rattling may have originally evolved to facilitate causal luring, which is the opposite of antipredator behavior displayed by some snakes.

Caudal luring is an aggressive mimicry where a snake may use tail vibration to attract prey. The prey species may mistake the tail for smaller prey, such as a worm and come close to the tail. As soon as the prey reaches striking range, the snake will attack its potential meal.

In addition to rattlesnakes, pit vipers such as cottonmouths, copperheads, and bushmasters are known for catching their prey using this technique.

Some scientists believe that the scales at the end of the tails in some snakes may be evolved to look like small insects, thus enhancing caudal luring.

However, most species of snakes kept as pets (such as corn snakes, gopher snakes, rat snakes, and kingsnakes) adapt well to handling so you should see their tail shaking behavior subsiding once trust is established.