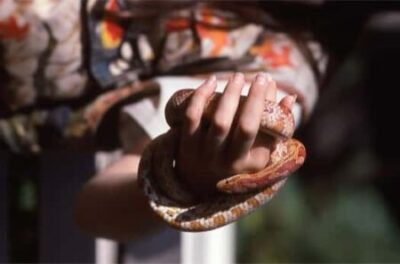 Being an ‘ectotherm’ means that snakes (reptiles) don’t produce their own body heat. Instead, they rely on external sources of heat to support their bodily functions. That’s the origin of the word ‘ectotherm’ itself: ecto- is from the Greek ektos, meaning outside, while -therm refers to heat.

Being cold-blooded gives snakes an advantage over other animals in their natural habitat. Because snakes don’t generate their own body heat, they don’t need to eat as much food. But, when it’s cold, snakes need to brumate (hibernate) until their environment is sufficiently warm for them to hunt prey, digest food, and mate.

Snakes are cold-blooded (ectothermic) because it gives them certain advantages in terms of survival in the wild.

What Makes a Snake Cold-Blooded?

Snakes don’t produce their own body heat like mammals. Their blood isn’t ‘cold,’ per se. To keep warm, snakes rely on their external environment. They need to be able to access both warm and cool areas, so that they can cool down and warm up, depending on their environment.

Cool places, like holes in rock formations and under loose soil or sand, enable snakes to avoid overheating during the summer months. While hot rocks that sit in the summer sun can provide them with heat in the evenings, long after the sun has set.

What’s the Difference Between Cold-Blooded and Warm-Blooded Animals?

The blood carries oxygen as well as warmth to every part of the body, spreading it out evenly. This means that mammals can have complex bodies with useful limbs: fingers, toes, tails, and brains.

Warm-blooded animals have other mechanisms by which to control their temperature. These include the following:

Most cold-blooded animals don’t share these mechanisms by which to cool or warm themselves up. They rely solely on external heat sources, usually the warmth of the sun or a heat mat in captivity.

Advantages of Being Cold-Blooded

It’s clear that some species benefit from being ectothermic. Let’s explore some of the benefits more closely:

Mammals need more food to maintain a higher body temperature. It is this higher temperature that enables their vital organs to function.

Snakes don’t need elevated temperatures, so they don’t need to eat as much food, or as often. That’s why they can go so long without eating food, and that’s essential in a living environment where food sources are scarce.

Less Prone to Viruses And Infections

Bacteria and viruses thrive inside warm bodies. So, a cold-blooded animal is less ‘likely’ to become infected. And if they do become infected, the infection or illness is less likely to be as serious.

Of course, that doesn’t mean that snakes are immune to bacterial infections and viruses, but they’re less common than they otherwise would be. This is a big advantage as viruses and infections would spread quickly within the snake population. It may also be one of the reasons why snakes live alone.

Snakes’ brains needn’t be as complex as those of mammals because they don’t need a variety of biological processes to regulate their temperature.

From a human perspective, an animal not being as intelligent as it could be would seem like a huge disadvantage. However, less complex brains use up less energy, which can be a positive thing for an animal living in the wild.

It means that there can be more snakes in a certain habitat than there otherwise would be. Cold-blooded reptiles eat less, so there’s more food, meaning that larger populations of snakes can be sustained.

Disadvantages of Being Cold-Blooded

Being ectothermic has its downside, such as:

During the winter months, snakes can’t keep themselves warm easily. They have to become far less active. This is known as brumation, which is similar to hibernation. This prevents them from hunting and breeding.

Snakes have to spend several hours a day basking somewhere warm, which takes up much of their time. Because they rely on the sun’s heat, snakes are more sluggish in the morning and late evening.

They have to warm up their body before they can maintain higher levels of activity. Unfortunately, this makes them easier much targets for predators.

Heat Is Needed To Digest Food

Snakes need to bask somewhere warm to digest their meals. This is another reason they can’t digest food in the winter.

The Journal of Experimental Biology highlights how rattlesnakes adjust their behavior to stay warmer when they need to digest a meal.

Snakes are found in warmer climates, like those around the equator. You’ll find lots of snakes in Australia and India, for example. Their most northerly reach is around southern Canada.

But in areas where the ground freezes, snakes can’t burrow. During the winter, they would still try to burrow and hide away, but the frozen ground would kill them before they managed to do so.

Snakes, and reptiles generally, are ectothermic because it allows them to thrive in their natural habitat. Being warm-blooded would have its advantages, such as extending the geographical range of snakes, but would make survival more difficult for snakes where they live today.