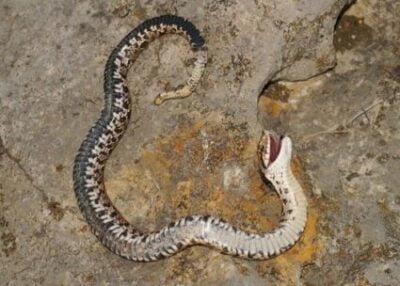 It can be a huge shock to find out that your pet snake has died overnight. If your snake has passed away all of a sudden, you’ll want to know why it happened. If you have other snakes, or plan to get a new baby snake shortly, finding out more about snake health is essential.

Almost every fatality relates to a snake’s care and living conditions. These issues can cause scale rot, mouth rot, anorexia, starvation, stress, parasite infestations, viral diseases, and more. However, even well cared for snakes can die of old age overnight in captivity.

The majority of snake health issues in corn snakes, ball pythons, kingsnakes, garter snakes, etc. are preventable. So, if you own any other pet snakes or plan to get a new snake, it’s vital that you adjust your approach to care. We will look at what causes snakes to die suddenly, but make sure that your snake is dead and not hibernating first.

Poor living conditions, such as an unclean enclosure, is the leading cause of death in snakes. Also, each species of snake has very specific needs. If you fail to meet those basic requirements, your snake’s life is in danger.

According to The Veterinary Nurse, scale rot is a condition caused by the snake sitting in a damp substrate for an extended period of time. The snake gets an open wound on its underside, which becomes infected by bacteria from the dirty water it’s sitting in.

While this alone isn’t enough to kill your snake, the bacteria in the wound can reach the bloodstream. This leads to sepsis, which is fatal in snakes. To identify whether your snake has scale rot, check its underside:

You’ll notice at least one patch of skin that looks like a raw open wound, almost like an ulcer. The rest of the skin on their underside will be pink to red, and swollen, which is a sign of infection.

Scale rot can be prevented with proper care. Just practice regular spot cleaning, where you remove excrement and urates from the substrate.

The substrate should be replaced monthly, or when required, and the enclosure should be cleaned with disinfectant on a monthly basis too.

Mouth rot is caused by an initial injury in the mouth, which eventually becomes infected.

The initial problem is that the snake loses a tooth or, in some rare cases, from prey that bites or scratches inside the mouth. This wound then becomes infected by bacteria.

Left unattended, the bacteria in the wound will start to multiply. For it to become fatal, the bacteria must pass to the bloodstream, where it will cause sepsis. This is what may have killed your snake.

Mouth rot is easy to identify. Open your snake’s mouth with a tool, e.g. with tongs or wearing a latex glove. You then need to do the following:

Check for the build-up of pus, redness, and swelling in the mouth.

If the sepsis became noticeable, then you may also see swelling and redness along the underside of the snake’s body.

Your snake will be wheezing as it struggles to clear its airways. It will breathe through its mouth because its nose is blocked. This is made worse by the fact that snakes cannot cough up any fluids in their lungs.

The snake may have raised its head with its mouth wide open. This is to allow gravity to pull the fluids down into the lungs, leaving its airways free.

If you notice lots of phlegm or pus in and around your snake’s mouth, then your snake may have died from a respiratory infection.

Stress in snakes can be caused by both improper care and unsanitary or unsuitable living conditions.

If you house your snake with other snakes, this can cause it stress. In the wild, almost every snake species lives alone.

Stress causes repetitive behaviors, such as the snake rubbing its nose against the glass of the enclosure. This can cause secondary health problems, i.e. open wounds and bacterial infections, such as sepsis.

A snake won’t just die from stress. The stress will lower its ability to fight off infections, and this can cause your snake to stop eating.

Snakes eat infrequently, but they can still die from not eating (anorexia). There are many reasons why snakes refuse food. These include:

There’s no way to definitively say that anorexia was the cause of your snake’s death, but you can check if it was a problem for your snake.

An underweight snake’s sides cave in, so that its cross-section looks like a triangle. You can see its spine as a ridge along the top of its body, and its ribs will be visible through its skin.

Losing weight usually co-occurs with other problems, like mouth rot.

Identifying parasites, such as mites and ticks, is straightforward because they’re visible to the naked eye. Here’s how to identify parasites:

Both kinds of parasites congregate around a snake’s eyes, mouth, and nostrils. These areas have an easy supply of blood to feed on, which is why they all prefer to locate in the same areas.

You may also be able to spot parasites around your snake’s enclosure, because they like to sit in the corner or under substrate when they’re digesting their blood meal.

Left untreated, parasites can drain the snake of so much blood that it has to produce far more than usual. This results in a lack of iron.

According to Acta Veterinaria Scandinavica, an infestation of fleas or ticks can cause anemia.

It’s unlikely that your snake died due to anemia brought on by parasites, provided that the condition is being treated. However, untreated parasites are often a sign of general neglect.

IBD is a viral infection that affects boas and pythons. IBD is passed on through contact. If your snake has come into contact with other snakes, either through being housed together or through a breeding program, then it may have caught IBD that way.

IBD can also be passed on indirectly. You may have handled a snake that had IBD, and then picked up another snake without washing your hands. Unlike a respiratory infection, IBD has a much wider range of effects:

According to the Journal of Virology, it affects cells throughout the snake’s body, including the neurons in their brain. So, it has neurological as well as physical effects.

If your snake had IBD, you might have noticed the following signs:

The symptoms get progressively worse over time. What starts as a head tremor becomes far more severe. The same applies to its inability to feed, which starts as less serious, but gets to the point where it takes many attempts for it to bite onto its prey.

In the wild, snakes don’t get the opportunity to reach old age. There are so many predators and natural hazards that they can fall foul of.

But in captivity, with proper care, it’s likely that your snake will reach the end of its natural lifespan. Each species has a different life span:

If your snake reached the average age for their species, then it’s feasible that your snake died of old age.

Sometimes, prey can cause severe injury when the snake first attacks the prey. The prey will literally fight for its life.

It’ll kick, bite, and scratch at the snake’s face, eyes, and body. This could open up a deep wound that you may not see in time.

Some owners leave live prey in an enclosure with a snake that doesn’t want to eat it. They hope that the snake will get hungry and eat it.

Unfortunately, the prey item will get hungry too, and when it does, it can start biting and attacking your snake. It won’t be able to eat your snake, but flesh wounds can turn septic. Unfortunately, sepsis can kill a snake.

A snake will rarely choke due to a small organ called the glottis, which sits at the top of its windpipe. Snakes use their glottis to avoid choking.

When eating, the snake will poke the glottis out as far as it can. That way, even if it has a meal that takes hours to fully swallow, it can still continue to breathe as normal. However, there is one problem:

If a snake overeats and tries to regurgitate its food, it can become stuck in its esophagus. If it can’t move the blockage, this can reduce the amount of air that it’s able to breathe.

This situation requires medical intervention where a vet tries to lubricate the snake’s throat to make the food easier to pass. If your snake died after it ate, this might have been the reason.

Sometimes there’s no clear reason why snakes die. Most owners are very attentive and caring. All you can do is learn as much about your snake species and the different health problems that may afflict your pet snake.