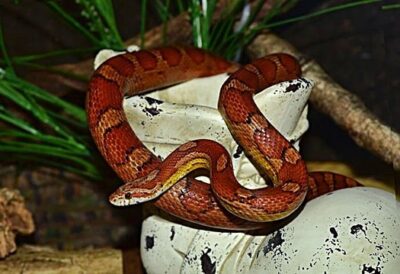 When a corn snake feels threatened in some way, it may shake its tail like a rattlesnake. Corns make this sound by vibrating their tail against the ground, not using multiple layers of cartilage. It sounds a bit like a rattle.

Corns snakes make a rattling noise with their tails to scare away threats. It’s a defense mechanism that’s intended to make potential predators believe that the corn snake is highly venomous.

We’ll look at the reasons why corn snakes vibrate their tails. It’s all a part of their evolution, and is likely a form of Batesian mimicry.

Why Do Corn Snakes Shake Their Tails Like a Rattlesnake?

Batesian mimicry is named after Henry Walter Bates, an English scientist from the Victorian era. He found that certain animals mimicked the behavior of more dangerous species.

Snakes are an example of Batesian mimicry, and not just because some non-venomous snakes shake their tails.

The milk snake is from the same family as corn snakes. They have a banded pattern that’s similar to the coral snake, from a different family. Coral snakes are among the most venomous of all native U.S. snakes.

Milk snakes, by contrast, are non-venomous. Even though they’re harmless, milk snakes can still scare a predator because they resemble the venomous coral snake. That’s at the heart of why corn snakes rattle their tails.

The noise of a rattle is frightening to a predator. The louder the noise, the more threatening it becomes. It’s why dogs bark, why cats hiss, and why humans raise our voices in threatening situations.

And just like many animals have evolved markings and patterns to show others that they’re venomous (poisonous), rattlesnakes have developed a rattle to tell other threatening animals that they’re very dangerous.

Regarding corn snakes, they still exhibit this behavior because it’s hard-coded into their DNA. You’ll notice that they only shake their tails if they feel threatened. That’s why they’ll do it if you suddenly reach into their enclosure or approach them in your yard, for example.

You’ll also notice that corn snakes rattle their tail when eating. They fear that you’re going to steal their food. Of course, you won’t, but a predator in the wild might. Tail shaking in corn snakes might scare them away.

Even if the predator is still intent on attacking a corn snake with a rattle, it still serves a purpose. It distracts the predator and diverts their attention.

This can give a wild corn snake time to escape from a predator. Also, instead of attacking the corn’s head, the predator will most likely attack the source of the noise (the tail) rather than the head. This gives corn snakes a chance to survive in situations where they otherwise wouldn’t.

These snakes go on to breed and pass this behavior down to their offspring. Before long, the whole population of corn snakes learns to rattle.

How Do Corns Snakes Rattle Their Tails?

A rattlesnake’s rattle is a series of segments made from keratin, the same substance as nails. The rattlesnake grows them throughout its life, adding another segment each time it sheds its skin.

According to the World Animal Foundation, rattlesnakes can vibrate their tail 50 times per second. The segments vibrate against each other. Since they’re hollow, they make a loud noise.

Corn snakes can’t do this as they don’t have a rattle. What they can do is very quickly shake their tail in much the same way. Their tail vibrates against the ground, which is what makes the noise that you hear.

Which Other Snakes Rattle Their Tails?

Many snakes vibrate their tails against the ground. They don’t all have rattles, but they shake their tails in much the same way. These include:

These snakes are colubrids or vipers. Rat snakes, kingsnakes, and gopher snakes are Colubrids, which is the same family as the corn snake.

Colubrids are the world’s largest snake family. Not only that, but since they’re all North American snakes, many have overlapping habitats.

They will have been coming into contact for thousands of years, hence how they’ve developed Batesian mimicry behavior (tail shaking).