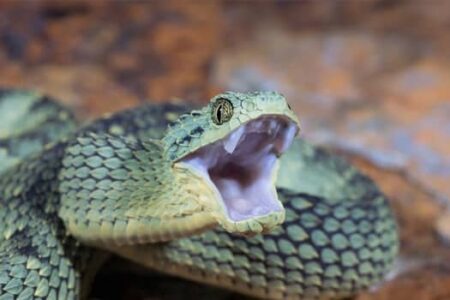 A snake attacking itself by biting its tail, the mythical tail-eating serpent, is a symbolic image that’s based on real-life habits. Ouroboros (or Uroboros) is a well-documented behavior that occurs in wild and captive species of snakes. However, a snake devouring its own body or tail continues to be a relatively uncommon behavior. But why would a snake bite itself?

While the act of self-cannibalism may seem absurd to humans, to a snake, it may seem entirely logical. Especially if it believes its tail is that of another animal. It may think the tail belongs to a predator or its prey. There are many snakes that eat other snakes (kingsnakes, coral snakes, etc) so ‘confusion’ over a food source is a common explanation.

Do Snakes Bite Their Own Tails?

You would be forgiven for assuming that this behavior is an urban myth. After all, what would a snake achieve from eating itself?

It isn’t a common behavior. When a snake bites its tail in error, it will recoil from the experience. If it continually does so and it becomes a habit, there will be an explanation for why it happens.

Why Do Snakes Try to Eat Themselves?

Explanations revolve around the following:

Possibly the most common reason why a snake would eat its tail is stress and agitation. This is most likely if the snake is living in captivity.

Snakes are easily stressed. They like to live a certain way and need a habitat that meets their needs. A snake uncomfortable with the temperature and humidity, for example, will quickly become unhappy. This stress can turn to disorientation, and a snake may eat its tail in such a circumstance. Other things that could cause stress for a snake include:

A captive snake that you cannot see is usually a contented snake. Most reptiles would rather hide and burrow than expose themselves to humans and the threat of predation.

Confusion and excitement surrounding food is another common explanation for snakes biting themselves. This could take many forms:

Another reason why a snake may bite itself is through sheer aggression. This is not the snake striking out against itself. Instead, it is mistaking its tail for another snake in its territory. After all, snakes are asocial by nature.

This is particularly likely if a captive snake’s terrarium is too small. If it cannot stretch out, it may mistake its own tail for another snake.

Some snakes begin biting themselves towards the end of their lives. This could denote a neurological condition, or it may suggest that the snake is in pain. If this applies to a pet snake, take it to a vet immediately.

If you notice a wild snake biting itself, walk away. Call animal control if you are worried about its welfare. Approaching it could result in a snake bite.

Which Species of Snakes Is Most Likely To Bite Themselves?

According to The New Encyclopedia of Snakes, the American rat snake (pantheropis obseleta) is particularly prone to eating themselves. There are at least 2 recorded cases of self-cannibalism.

Why Do Rattlesnakes Bite Themselves?

The Christian missionary E. Stanley Jones popularized the image of a rattlesnake biting itself. Jones memorably claimed that “a rattlesnake, if cornered, will become so angry it will bite itself.”

Jones was preaching at the time, suggesting that he was speaking metaphorically, but he had a point. A rattlesnake can bite itself out of sheer excitement, leading to confusion. The noise generated by a rattlesnake’s tail could provoke a predatory response, such as biting.

Will a Snake Die if it Bites Itself?

Also, unless there’s a neurological problem, a snake will usually bite once (or stop biting), realizing its mistake. So, the snake won’t issue enough venom to cause its own demise. Also, not all snakes have venom glands.

There’s more than just the venom of the bite to consider. When a snake sinks its teeth into its tail or body, puncture wounds and bleeding will occur. This could lead to a anemia or the snake bleeding to death.