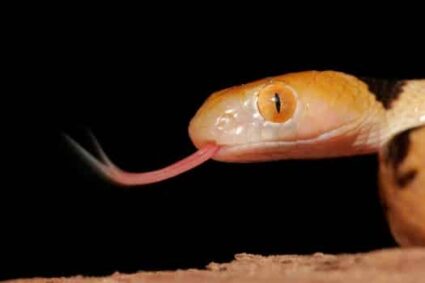 If you have ever seen a snake flick its tongue in the air, you may have noticed that it is shaped like a fork. The tongue starts as one straight line and then breaks off into two tips, kind of like the “tines” of a fork. It has a very important purpose for helping snakes to navigate their world and finding what they need to survive in the wild.

A snake uses its tongue to take in scent particles, effectively using its tongue to “smell.” These scent particles are flicked by the tongue up against the vomeronasal organ (Jacobson’s organ) on the roof of the mouth. The two tips of the tongue allow the snake to find the location of what it has smelled. Snakes use their forked tongue “smell” to find food, find a mate, and to avoid predators.

Let’s learn more about how snakes use their tongue as a sense of smell, and why a forked tongue is so crucial for snakes.

Contents show
1 Why Are Snakes Tongues Forked?
1.1 Is This ‘Sense of Smell’ A Sixth Sense?
1.2 What Are The Benefits Of A Forked Tongue?
1.2.1 Finding Food
1.2.2 Finding A Mate
1.2.3 Avoiding Threats
1.3 What Animals Have Forked Tongues?
1.4 Are Snakes With Forked Tongues Venomous?
1.5 What Does a Forked Tongue Symbolize?

Why Are Snakes Tongues Forked?

You will often see a snake quickly stick its tongue out of its mouth and then flick it back into the mouth. The tongue collects the particles in the air which creates odor and brings them into its body.

On the roof of a snake’s mouth is a special organ. This is known as a vomeronasal organ, or a Jacobson’s organ. The Jacobson’s organ is just behind the snake’s nose. This organ has many ridges on its anterior surface, creating a large surface area for a relatively small organ.

The Canadian Journal of Zoology published a study on what happens after the tongue returns into the mouth. The upper surface of the snake’s tongue flicks up to touch the Jacobson’s organ on the roof of the snake’s mouth.

The snake’s tongue is transferring the chemical signals it picked up from the outside air to the Jacobson’s organ by means of the ridges on the organ. That same study found that if scientists removed the ridged structures from the Jacobson’s organ in garter snakes, then the snake became unable to detect food odors in an open foraging field anymore.

From there, the sense particles are transferred into nerve signals. These travel to the snake’s brain and give it a picture of what it has smelled.

Is This ‘Sense of Smell’ A Sixth Sense?

Snakes also have a nose in addition to their tongues and Jacobson’s organs. Does this mean that this sense we are describing here is not exactly “smell” as we know it, but something else?

Scientists are still attempting to understand how the Jacobson’s organ works. “Smell” is, for now, the best word for us to use to describe what the snakes are doing. What we know for sure is that snakes are not the only animals who use vomeronasal organs.

For example, cats and horses also take in chemical signals in this manner, but they do not flick their tongues in order to do so. If you see a cat lifting up its upper lip and wrinkling its nose, that is a good sign that the cat is “smelling” the air with its tongue and vomeronasal organ rather than using its nose to “smell.” Even humans have vomeronasal organs. However, we do not use this organ anymore; it is now a vestigial organ, rendered obsolete through evolution.

What Are The Benefits Of A Forked Tongue?

Researchers at the University of Connecticut posit that the snake uses its forked tongue to be more accurate and adept at tracking the animal it has smelled. When the snake flicks out its tongue, it spreads out the two ends of the fork as widely as it can. The space between the “tines” of the fork makes a difference.

The forked shape of the tongue provides two chemosensory edges with a space in the middle, rather than just one edge in a non-forked tongue. The chemosensory edges pick up on the pheromone trails of other animals. This allows the snake to pick up two points on a scent trail at once, rather than just one. This, in turn, gives the snake a sense of not only where the prey animal was, but which direction it was moving.

A snake’s brain uses these two points of data to more accurately pinpoint the location of its prey, making an instantaneous educated decision instead of a guess based on old information. For example, if the smell is stronger on the left tip of the snake’s tongue than the right tip, then the snake knows that the animal is to its left. Forked tongues allow snakes to have a more three-dimensional “smell view” of the world around them.

With only one tongue-tip in a non-forked tongue, the snake might just have to assume that the prey was somewhere in front of it, without knowing whether to strike to the right or to the left.

Among reptiles, forked tongues are always associated with animals that search widely as they forage for food. When a snake has a wide hunting ground, with its small animal prey sparsely distributed, it cannot afford to make mistakes about finding its prey.

Small rodents and lizards are fast runners and can easily zig-zag away from a hungry snake. The snake must make a single precise strike and be correct the first time in order to score a meal.

The forked tongue gives the snake enough information to make the most accurate decision about what direction the source of the smell is coming from. It then simply has to lie in wait until the prey comes close enough to strike. In the past, snakes that were more adept at finding food were more likely to survive long enough to breed. As a result, natural selection favored forked tongues through reproduction and evolution.

Snakes also use their tongues to follow the pheromone trails of not only prey but also potential mates. Nearly all snakes are asocial, preferring to live alone in their own territories than to hang out in large groups of family and friends. The exception is when it comes time to mate. At this point, a male snake will travel far out of its territory in order to find a female snake.

To find her, the male will follow the female’s trail of pheromones. Just like with tracking the pheromones of prey, the male’s forked tongue allows it to more accurately identify the location of a female snake who is moving around just as much on her day to day activities of hunting and basking.

A snake that finds a mate more quickly than other male snakes is more likely to reproduce. This means that in the past, forked tongues were an advantage for being able to breed, once again allowing forked tongues to propagate through natural selection.

Snakes not only use their sense of smell to find things that they like, but to avoid things that they don’t like. While snakes may seem dangerous to humans or rodents, a lot of animals are a danger to snakes as well. Common threats to snakes include the following creatures:

A snake that knows exactly which direction an eagle is flying in is a snake that knows where to hide in order to avoid getting eaten. Forked tongues are certainly a survival advantage for snakes on multiple fronts.

What Animals Have Forked Tongues?

Interestingly, some lizards have forked tongues as well. These include the following large, carnivorous lizards:

These lizards use their tongues in the same way as snakes, flicking the tongue to capture scent particles and bring them into the mouth to the Jacobson’s organ.

That’s part of what makes these lizards such excellent hunters and allows them to survive in the wild. This shared trait of forked tongues indicates some shared ancestry among these species of lizard with snakes.

Are Snakes With Forked Tongues Venomous?

There is a common misconception that snakes with forked tongues must be venomous. However, all snakes have forked tongues, so you don’t need to particularly worry that a snake with a forked tongue is poisonous.

What Does a Forked Tongue Symbolize?

Have you ever heard the idiom that someone is “speaking with a forked tongue”? The phrase is used to mean that a person is making an empty promise, or that they are speaking in a false, duplicitous way.

In mythology, a forked tongue is a symbol of dishonesty and deceit, often ascribed to demonic or evil figures. In reality, it is a useful tool for reptiles to find their food. There is nothing inherently “evil” about a snake.

APA Style: Carter, L. (December 16, 2020). Why Do Snakes Have Forked Tongues? (with Video). Snakes For Pets. Retrieved December 16, 2020, from https://www.snakesforpets.com/why-do-snakes-have-forked-tongues/