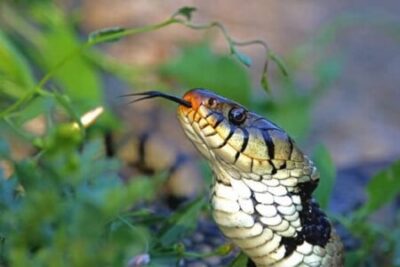 You’ll be familiar with the hissing sound that snakes make. All snakes can hiss, though it may be a quieter sound in smaller snakes. It’s a trait shared by wild, captive, venomous, and non-venomous snakes alike.

Hissing is a sign that a snake feels threatened in some way. Snakes hiss to make themselves seem intimidating to predators. If a snake hisses at you, it means that it’s unhappy and wants you to go away. Even docile snakes will occasionally hiss when they’re fearful or stressed.

We’ll explain how snakes make a hissing sound, and why snakes hiss in certain situations. Hissing is always a deliberate action. When a snake hisses at you, there will be a reason why it happens.

How Do Snakes Hiss?

To understand precisely how snakes make hissing sounds, you’re going to need to understand more about the basic snake anatomy.

Snakes have an organ, called the glottis, located underneath the tongue. It’s an extension of its trachea (windpipe). The glottis has 2 functions:

Some snakes, such as vipers, can also produce hissing sounds when they inhale, according to the Biological Journal of the Linnean Society.

Do All Snakes Hiss?

All snakes have a glottis. Without it, they wouldn’t be able to breathe properly while eating. And because they all have a glottis, all snakes possess the ability to hiss. However, that doesn’t necessarily mean that all snakes will choose to do so. Some snakes are more prone to hissing than others, or can hiss more loudly than others.

Wild snakes, particularly those who are predated upon by other animals, are likely to hiss as a defense mechanism. Their hisses can be pretty loud and menacing, too. Hognose snakes are definitely in the running for the “snake breed with the loudest hiss.”

When approached by a predator, they mimic venomous snakes by flattening out their necks and hissing menacingly. Other snakes known for their hiss include pine snakes and vipers (particularly Russell’s viper).

Tame, captive-bred snakes, on the other hand, don’t often feel the need to hiss. With frequent handling, captive snakes come to realize that humans are not dangerous. And with no predators in their environment, they don’t often feel threatened.

Why Do Snakes Hiss?

Snakes hiss for protection. They developed the loud, menacing sound as a defense mechanism. Vipers and other venomous snakes use their hiss as a warning sound to tell an approaching predator that they’re about to bite.

Even non-venomous snakes will hiss. Zoologists believe that harmless snakes developed the hiss as a form of Batesian mimicry. By pretending to be venomous, predators are likely to leave them alone.

Do snakes hiss to communicate with other snakes? No, the frequency (pitch) of a typical snake hiss ranges from 3,000 to 13,000 Hertz, according to research in the Journal of Experimental Zoology.

This frequency is outside the range of a snake’s hearing (about 80 to 1000 Hz). So, snakes can’t hear their own hisses or the hisses of other snakes.

Why Does My Snake Hiss at Me?

Let’s look at the reasons why a pet snake might hiss at its owner:

Snake Has Been Startled

Suddenly picking your snake up when it’s not expecting it could surprise it. The snake is likely to mistake you for a predator. This could also happen if you make sudden or fast movements in the snake’s presence.

A startled snake will become defensive and may hiss in response to the perceived threat. Once it realizes that it’s you, it’ll probably stop hissing.

Make slow and deliberate movements around your snake. When handling, hold your snake by the middle of its body, not by the head or tail.

Baby snakes are instinctively primed to watch out for predators. They feel threatened easily, and don’t trust humans.

By handling them, snakes learn that some humans aren’t a threat. Establishing up a regular handling schedule will enable the snake to adjust to you, so it’ll be less likely to hiss or strike at you.

Never catch a wild snake with the intention of keeping it as a pet. Snakes bought from responsible breeders are far more tolerant of humans.

Snakes are solitary creatures that usually live on their own. In captivity, snakes become used to having humans around. However, they do need their alone time as well.

If you handle your snake too much, it might become stressed and agitated. Your snake may be hissing at you to indicate that it doesn’t want you around right now.

Snake Is About to Shed

Snakes shed their skin 3-4 times per year. During the period just before shedding its skin, the snake can become anxious. For a period during each shed, the snake can’t see very well as fluid fills the skin over its eyes.

If you choose to handle your snake during shed, which you shouldn’t, be prepared to be hissed at. Snakes much prefer to be left alone while shedding. They often become reclusive and hide away.

Snakes eat large meals infrequently. As a consequence of this, it takes them a long time to digest their food – days, or even weeks.

For this reason, most snakes choose to find somewhere secluded to relax after a meal. Being disturbed or becoming stressed after eating can cause the snake to regurgitate its meal. Don’t handle your snake for at least 24-72 hours after feeding.

Sometimes, snakes’ hiss without any identifiable trigger. If you’re wondering why a snake is hissing for no reason, you should be assured that it’s normal. Just leave it alone for a while and come back later.

Do Snakes Make Noises Other Than Hissing?

Hissing is not the only noise a snake can make. Some species have developed some quite interesting methods of producing sound.

Rattlesnakes have highly specialized, hard rattles on the ends of their tails, which are segmented. When shaken, these segments collide, making the characteristic rattling sound.

Rattlesnakes use their rattle in the same way that other snakes use a hiss. It’s a warning sound, saying “stay away, I’m dangerous.”

Interestingly, other snakes, like rat snakes, can mimic rattlesnakes. Though they don’t have rattles, they shake their tails on the ground, making a somewhat similar noise.

The King Cobra is a large, venomous snake found in Asia. It feeds almost exclusively on other snakes, making it the “king.” As well as its eating habits and characteristic “hood,” it has one other distinguishing feature.

The King Cobra’s hiss sounds unlike any other. The hissing of most other snakes has a dominant frequency of 7,500 Hz, which is high-pitched.

The dominant frequency of a King Cobra’s hiss is around 600 Hz. This means that when they hiss, it sounds almost like a growling dog.

Some vipers, such as saw-scaled vipers, also have an impressive defensive display. Rather than hissing, rattling or cloacal popping, these snakes rub their scales together. It’s a process known as “stridulation.”

When intimidated, saw-scaled vipers arrange their bodies into coils and rub their scales against each other. This produces a very distinct sizzling sound, which is not all that dissimilar to a hiss.

A hiss from a snake is a warning in response to a threat. If a snake hisses at you, you’re doing something it doesn’t like.