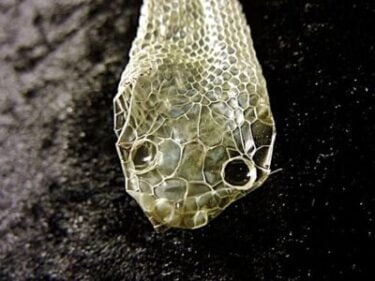 Snakes shed their old skin all in one piece. To ensure that the process goes smoothly, snakes require humid conditions. But the level of humidity that’s required depends on the species of snake. Unfortunately, too much humidity can lead to painful skin conditions, such as scale rot.

Snakes don’t have stretchy skin. As a snake increases in size, it needs to grow entirely new skin for its larger body. If a snake doesn’t shed its skin, this can cut off its blood circulation. The shedding process (known as ecdysis, sloughing, or molting) also helps the snake to get rid of parasites, such as mites and ticks.

Snakes can experience shedding problems, such as stuck eye caps, if conditions aren’t sufficiently humid. Snakes feel more vulnerable at this time, so you should never attempt to peel off a snake’s dead skin. This will lead to stress, trauma, and aggression. Just modify its living conditions so that they more closely mirror your snake’s environment in the wild.

The Journal of the Royal Society looked at the structure and properties of snakeskin, pointing out that “snake integument (the outer scales) consist of a hard, robust, inflexible outer surface … and softer, flexible inner layers.”

It’s like a suit of flexible armor that protects the snake from the rough, hard ground or bumpy tree branches. Bear in mind that their body is always in contact with the ground, rocks, and branches. Without a hard outer layer, their belly would be covered in cuts and abrasions.

What Is It Called When Snakes Shed?

Snake shedding has several names. These include:

There aren’t multiple ‘kinds’ of snake shed. Not only that, but all snakes shed in the same way, and prefer to get all of their skin off at once.

When Do Snakes Shed Skin?

Snakes usually shed their skin at night, so owners often miss when it happens. This is because snakes are nocturnal. This means that they’re awake and far more active at night. The more active they are, the more easily that they can remove their old skin.

Shedding in snakes takes between 9 and 14 days. This depends on the activity level of your snake, the humidity, the temperature, and their size.

While all snakes follow the same steps, some snakes shed quicker or slower than others.

How Do Snakes Start Shedding?

Shedding starts when the snake’s skin begins to turn dull. If you look at a healthy snake, especially after they last shed, they have gleaming scales. Before they start to shed, this shine disappears, and their scales take on a dull and lifeless appearance.

This dullness progressively gets ‘worse’ the further along in the process your snake gets.

You might also notice that your snake’s belly starts to turn light pink. A pink belly means one of two things. It can mean either that it’s about to shed, or that it’s been burned by a heat rock that’s become too hot, perhaps due to a malfunction.

What is the Blue Phase in Snakes?

You’ll notice the ‘blue phase’ after about three days, and up to the end of the first week (i.e., seven days from when their scales became duller). Two changes characterize this phase:

This is the most recognizable part of the process because the change to your snake’s eyes is obvious. You’ll also notice that your snake becomes less active (lethargic).

While your snake is ‘in blue,’ it’s best not to handle or feed it by hand. Snakes tend to be grumpier and more aggressive when they’re in the blue phase. This is because they don’t want to move or be moved, and also because they can’t see anything.

How Does a Snake Start Shedding?

A few days after its eyes and scales clear up, your snake will start to shed in earnest. It’ll start by rubbing its head against items. You’ll see the snake rubbing its face against the glass or plastic of their vivarium, or a stick or rock in its enclosure.

The point is to split the skin around their face. When it has, the snake will start making the hole bigger, and trying to wriggle through it. This is easier to do when the skin has retained some moisture.

Once there’s a hole, it’ll curl themselves around rocks, branches or anything else with a rough surface. As the snake winds its way around things, it’ll pull the skin back.

Will Snakes Eat While Shedding?

Many snakes don’t eat while shedding because of their decreased activity levels. When you offer your snake food, it might become defensive.

Because it can’t see properly, they’re more wary than usual. But, even if it can smell the food, it might not eat. The snake’s appetite will return after the shed has been completed.

Do Snakes Eat Their Shed Skin?

Snakes crawl out of their skin and slither away, leaving the skin where it was. So, why don’t snakes eat their own skin?

Snakes don’t need to eat their skin as they get all of their nutrients from their diet of rodents, amphibians, lizards, birds, or fish.

Shed snakeskin contains a negligible amount of vitamins and nutrients. For all the effort that the snake would need to put into eating its own shed, it wouldn’t be worth it for the snake.

Even if a snake did want to eat its old skin, it wouldn’t be able to do so. Lizards can tear their skin into pieces, chew it and swallow it bit-by-bit. Snakes have to swallow food whole, so it simply wouldn’t work.

Shed skin is too lightweight to eat whole. If a snake tried to swallow it, the skin would likely break apart, or not be heavy enough to move down into its stomach.

Problem sheds in snakes are primarily due to there not being enough humidity. If the air and their skin are too dry, the snake will only be able to peel their skin piece-by-piece.

The main problem is if they can’t shed two specific parts of their skin (the eye caps and the tip of their tail.) This is called a stuck shed. It can cause a snake to go blind or die prematurely.

Don’t try to physically remove the skin yourself as this will cause your snake stress and lead to aggression. Instead, you need to increase the amount of humidity in your snake’s enclosure:

If your snake still can’t shed easily, you can try bathing it. Place the snake in a bowl of water using a snake hook/tongs. The water should be the same temperature as its vivarium (about 80 degrees Fahrenheit).

Let it swim around for 15 minutes at most. Make sure that wherever it bathes that it can easily poke its head out of the water.

Once it’s bathed, take it out of its bowl/the bath with your hook/tongs. Hold it in a soft towel and let it move about freely. Its skin should slough away more easily.

Do Snakes Ever Stop Shedding Skin?

Snakes never stop shedding their skin. Hatchlings will go through their first shed in week one of their life. They grow quickly, and they have to shed their skin far more often.

The regularity of shedding also depends on the rate at which you feed your snake. The more you feed your snake, especially as it’s initially growing up, the quicker it’ll grow and the bigger it’ll get before it reaches maturity. Snakes shed when they outgrow their skin.