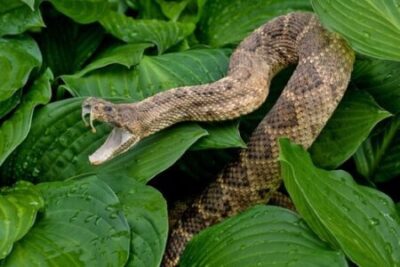 Snakes have large jaws that they sometimes open up wide. It’s almost like the snake is ‘yawning’ because it’s tired, but that’s not the case. ‘Mouth gaping’, as it’s also known, happens for a range of practical reasons.

The snake could be taking ‘chemical cues’ from its environment, such as being able to smell nearby prey. Snakes yawn to stretch out their jaws before and after a meal, and after resting for a long time. Snakes will also gape to get more air into their lungs when they’re sick with Inclusion Body Disease (IBD) or a respiratory infection.

There will be a reason for mouth gaping in snakes, but it will require careful observation and analysis to find out exactly why. The reason for yawning is usually benign, but there are illnesses that can be fatal.

Why Do Snakes Yawn?

If your snake won’t stop yawning, and you can’t attribute gaping to a benign reason, then you should take your snake to see a vet.

This is a sign that your snake is getting hungry, or something that a snake does to prepare for its meal when it notices that you’re about to feed it.

Snakes eat their prey whole. They don’t have incisors to cut food into pieces, or molars to break it down further. So, due to their basic physiology, snakes can only swallow food whole.

This process resembles yawning because the snake has to stretch its jaws open wide. The snake prepares its mouth for swallowing large prey by stretching the ligaments in its jaws.

Snakes yawn after they eat, as well as before they consume a meal. If you anthropomorphize a snake, you may think that it’s tired after eating a meal, but that’s not the case. The point of mouth gaping so is to realign the jaws.

When a snake starts to eat, it opens its jaws wide. It then maneuvers its jaws forward, one followed by the other, to pull the prey in. This can take several minutes for small prey, or even longer for large prey.

This stretches the snake’s jaws out. While it’s impossible to know exactly what a snake feels, this may cause some sort of discomfort.

It may also mean that the snake’s bite is out of shape, e.g. one jaw is slightly to the left of the other. The snake will yawn at least once after its meal.

Snakes can also gape because they aren’t getting enough air. Yawning opens the airways, allowing more air into the lungs.

Respiratory infections are bacterial or viral infections of the nose, throat, and lungs, that have symptoms of flu or a heavy cold.

This stops a snake from breathing easily. A snake’s unique physiology means that it can connect the end of its windpipe (the glottis) directly to its nose to breathe easier, but when the nose is blocked, the snake can’t breathe. So, it opens its mouth to breathe instead.

If the respiratory infection is a minor one, it may yawn occasionally. If it’s severe, then it may yawn frequently, or even breathe through its mouth at all times. This is a sure sign that your snake is sick.

Inclusion body disease is a viral disease that affects captive boids, especially the boa constrictor. While there is a cure for respiratory infection, there is no cure for IBD, and the condition is fatal.

Before IBD kills, though, it causes several worrying symptoms. Symptoms vary, but include pneumonia, head tremors, refusal to feed, and stargazing.

Stargazing is where the snake lifts its head to look upwards in a seemingly involuntary fashion. It may also ‘corkscrew’ when it tries to feed, which is where it will strike, but miss. Alongside all these symptoms, you will notice your snake mouth gaping.

The tongue catches particles or pheromones in the air (chemical cues), according to the Journal of Experimental Zoology.

The snake then presses its tongue to the vomeronasal organ and smells/detects what its tongue has picked up.

This is why a snake may yawn when it goes somewhere new. The snake is sniffing its environment to see if there are any threats (predators) or food sources (prey) nearby.

This is the most similar behavior to yawning when tired that snakes display. Snakes are immobile for long periods throughout the day and night.

While it’s impossible to tell only by looking, this behavior is likely to be equal parts sleeping and equal parts resting to conserve energy.

Either way, when a snake first starts to move again, it may begin to gape. This is akin to a human stretching when they wake up, or when he or she gets up after a long period sitting down.

Snakes do this because they need to stretch their muscles after having been immobile for a long time. Extended periods of immobility cause restricted movement, tension and tightness in the muscles, and pain. Stretching partly alleviates these issues.

It may be impossible to tell why a snake is yawning, so it needs to be monitored closely. However, it’s possible that mouth gaping is a symptom of an illness. Assess the following:

Cross-check your snake’s symptoms as this should tell you why your snake is mouth gaping. The reason is likely to be something that won’t affect a snake’s health, but it’s important to check for everything.