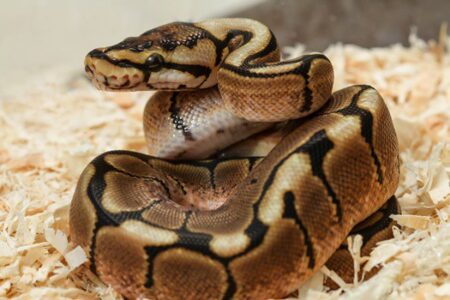 Many pet snakes exhibit tunneling behavior that mimics their tendency to burrow in the wild. Wild ball pythons don’t dig burrows, but pet ball pythons often burrow through their substrate.

Some pet ball pythons burrow in their bedding, while others don’t. It doesn’t always mean that something’s wrong. It comes down to your snake’s personality. However, a ball python that suddenly starts burrowing may be stressed out or sick. It also may suggest that the temperature or humidity in the vivarium is incorrect.

If your ball python has always enjoyed burrowing, it’s most likely normal. However, you should investigate any sudden change in your ball python’s behavior. It may be a sign that something is wrong.

But ball pythons are not burrowing snakes. Instead of digging their own shelters, ball pythons usurp burrows that have been made by other creatures.

Usually, these dens are made by small mammals or tortoises. However, ball pythons can also live in termite mounds, rock piles, and anywhere else cozy and dry.

If a wild ball python had nowhere to hide, it may try to create its own rudimentary shelter. However, ball pythons can’t tunnel in hard ground. Instead, they hide out under leaf piles, in or underneath logs, and in loose sand.

As pets, ball pythons spend much of their time in hide boxes. Hides take the place of the animal dens that they would use for shelter in the wild. Some pet ball pythons, however, will also burrow in their substrate.

Do Ball Pythons Dig Tunnels in the Wild?

Certain species of python are adapted for burrowing. For example, the Calabar burrowing python has a blunt head covered in thick shield scales. This allows it to push through the earth.

According to the Journal of Morphology, the Calabar python’s skin is also highly resistant to penetration. So, it won’t get hurt from encountering rocks or hard ground while digging.

Ball pythons, however, are not designed for burrowing. It’s easy to tell this by looking at them. Ball pythons have soft scales and fleshy snouts that are incapable of piercing solid ground.

But the substrate in a pet ball python’s vivarium isn’t the same as the ground outside. Snake bedding, such as Aspen shavings and coconut husk, is loose and lightweight.

Ball pythons have no trouble making rudimentary tunnels in bedding. They can move it out of their way just as they’d manipulate leaf litter and sand in the wild. But they can’t dig sturdy or complex tunnel systems.

Is It Normal for My Ball Python to Burrow?

Most ball pythons opt to use their hide box instead of digging their own shelter. However, a ball python trying to burrow in its bedding is a fairly common sight.

It’s not usually a sign that anything is wrong. Some ball pythons just seem to enjoy burrowing in substrate.

This might have something to do with gender. According to the Italian Journal of Zoology, female ball pythons are more terrestrial than males. This means they spend more time on the ground, rather than in trees.

So, it could be that female ball pythons are more likely to burrow than males. Male ball pythons, on the other hand, may be more inclined to use climbing enrichment e.g. logs.

It’s hard to know exactly why some pet ball pythons burrow, and others don’t. But it’s certainly not an unusual or rare behavior.

Your snake may be sifting through the substrate to search for scent trails left by prey. Alternatively, it could be trying to find the entrance to a rodent den.

Whatever the reason, a burrowing ball python will come into close contact with the heat mat. So, use a thermostat to ensure it isn’t too hot. Vet Times reported that a ball python received second and third-degree burns from an unregulated heat mat.

Why Is My Ball Python Suddenly Burrowing?

All ball pythons have individual personalities. Some ball pythons enjoy digging in their substrate more than others.

If your ball python has been a burrower all its life, there’s likely nothing to worry about. It might just be part of its personality.

Naturally curious and active ball pythons, that enjoy exploring, are more likely to burrow than others. More timid ball pythons may also burrow because it helps them to feel secure and hidden.

However, if your ball python has suddenly started burrowing when it didn’t before, there may be something wrong.

A ball python’s enclosure should be 90-95 degrees Fahrenheit at the warm end, and 70-80 at the cool end. Depending on how the vivarium is heated, your ball python could be burrowing because it’s too hot or cold.

If your vivarium has a heat lamp, your ball python may burrow to try and cool itself down. As the heat comes from above, the substrate will remain cooler than the air around it. If you notice your ball python burrowing in the cool end of the tank, this may be why.

Alternatively, if you use an under-tank heater, your ball python might be trying to get closer to it. This means that your thermostat is broken, or you haven’t got it set high enough.

Ball pythons have a humidity requirement of 50-60%. This will need to increase to 65-70% while your ball python is shedding.

If your ball python’s enclosure is too dry, it may burrow in the substrate to try and find groundwater. You may also notice your ball python taking frequent baths in its water bowl.

With low humidity, your ball python will struggle to shed and may experience respiratory problems. Use a hygrometer to measure the vivarium’s moisture and ensure it’s within the ideal range.

Ball pythons instinctively want to hide a lot of the time, especially during the day. This is because, in the wild, ball pythons hide in burrows to escape predators.

Your ball python’s vivarium should include a plastic or wooden hide, with a hole for entry and exit. If your snake can’t access a hide, it may feel vulnerable. In this case, it may bury itself in the substrate in an attempt to feel secure.

Ball pythons require bigger hides as they grow up. Periodically check to ensure the hide is still large enough for your snake to fit inside.

However, the hide might also be too big. Ball pythons instinctively seek the smallest, tightest spots to hide in. If the hide box is too large, it won’t feel secure inside. That’s why it might choose to bury itself in bedding instead.

A sick ball python will instinctively try to hide, as it knows it’s more vulnerable to predators. It won’t be able to move as fast as it would when it’s healthy. Sick ball pythons also spend more time resting than healthy ball pythons, in an effort to heal.

Some sick ball pythons may prefer to bury themselves in substrate rather than use the hide box. This may be because being covered in bedding helps them feel more secure and hidden. A stressed or anxious ball python may burrow for the same reason.

Ball pythons may also burrow out of boredom, if they have nothing else to do. Try providing a few forms of enrichment for your ball pythons, such as climbing branches or fake plants.

Why Is My Ball Python Not Burrowing?

If your ball python usually burrows, but has suddenly stopped, there’s probably nothing to worry about. Unlike some species of snake, such as hognose snakes, burrowing isn’t standard behavior for ball pythons.

Most ball pythons don’t burrow in their substrate. If your ball python doesn’t burrow, it means it doesn’t feel the need to cover itself. Your snake feels safe and happy in its environment.

However, if your ball python’s behavior has changed in other ways, there may be cause for concern. If your ball python is less active in general, and seems listless or apathetic, it could be sick.

Look out for any other signs of illness in ball pythons, such as:

If you notice any of the above, consult an experienced reptile veterinarian.