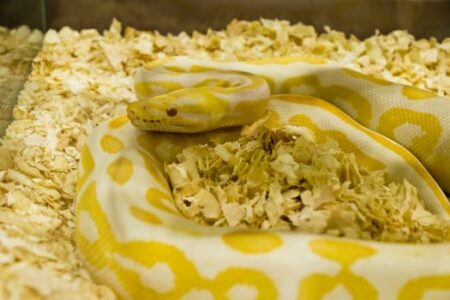 It’s normal for pet snakes to spend the majority of their time curled up in their hide. So if your snake suddenly seems more active than usual, you may be concerned about why this is happening.

Snakes are most active when they’re hunting for food, so your snake may be hungry. If not, it might be looking for a mate. This is most likely if your snake is male. Sudden activity in snakes can also be a sign that they’re unhappy or stressed. This is usually because of a husbandry problem, such as incorrect temperature or humidity in the vivarium.

Some snakes are more energetic than others. Active hunters, such as corn snakes and kingsnakes, move around more than ball pythons. But if your snake is acting unusual, or out of character, something could be wrong.

Why Is My Snake Moving Around So Much?

Snakes are not well known for having an abundance of energy. They are one of the least active animals you could keep as a pet.

It’s normal for snakes to spend all day hiding, and not moving much. For most snakes, this is a sign that they’re feeling happy and content.

Some species of snakes are more active than others. This depends on whether the snake is an active hunter by nature, or an ambush predator.

Active hunters are more energetic because they’re designed to chase after prey. Their bodies are lighter and slimmer than ambush snakes. Examples include corn snakes, milk snakes, and rat snakes.

By contrast, ambush predators, such as ball pythons, wait for prey to come to them. These snakes spend most of their time lying around.

When your snake is moving around the vivarium, this is called roaming. All snakes will roam from time to time, especially more active snakes. But it shouldn’t be incessant.

Why Is My Snake Active At Night?

The time of day that your snake is most active will depend on its species. Nocturnal species, such as ball pythons, are most active during the nighttime. In the wild, the night time is when they would hunt prey.

For diurnal species, such as hognose snakes, the opposite is true. Corn snakes and milk snakes are mostly crepuscular. This means they’re most active during dawn and dusk.

However, your snake’s circadian rhythm can be affected by light levels in your home. If the vivarium has a heat lamp that’s permanently on, your snake will struggle to tell day from night. Similarly, if your home has lights on a night, the same problem could occur.

Why Is My Snake More Active Than Usual?

Some types of snakes are naturally more active than others. But even snakes of the same species can have different energy levels.

This depends on the snakes’ individual personalities. Shy or skittish snakes won’t come out of their hide as often, at least when you’re around.

Gender can also have an effect on some species. According to the Italian Journal of Zoology, male ball pythons are more arboreal, so they may spend more time climbing on objects.

If your snake has always been active, then it’s probably normal. As long as it’s eating, gaining weight, and isn’t showing signs of illness, there’s nothing to worry about.

But a snake that is suddenly more active than usual could be telling you that something is wrong. It could be a sign of stress or incorrect husbandry.

If it’s been a while since your snake last ate, it may be searching for food. This is likely if your snake is an active hunter species, such as a corn snake.

Most snakes will naturally start roaming their vivarium looking for prey after they finish digesting their last meal. To check this, look for snake droppings in the vivarium. If your snake has recently pooped, it’s likely ready to eat again. Other signs that your snake is hungry include:

If your snake is getting hungry earlier (or more often) than usual, consider upping its prey size. The larger a snake gets, the larger its meals should be. Feed your snake a rodent that is slightly wider than the broadest part of your snake’s body.

When snakes are preparing to shed their skin, they are usually less active than normal. This is because they can’t see well. A layer of fluid builds up between the old and new skin layers, causing cloudy eyes.

But once your snake is ready to start shedding, it will be more active than it usually is. This is because it has to move around a lot to get the old layer of skin off.

You may notice your snake rubbing its nose against various objects in its enclosure, to start the shed. It will usually choose something rough-textured, such as a rock or log. Then, it will roam around the vivarium slithering out of its skin.

Once the sloughing process has started, it can take up to a day to complete. But if your snake has problems shedding (dysecdysis), the process may take longer.

3) Searching For a Mate

For snakes, mating season usually starts in the early spring. However, in captivity, a snake may feel frisky during any time of year.

When male snakes get the urge to mate, they’ll start to hunt. They’ll search their environment in an attempt to pick up pheromones released by a female snake. According to Chemical Senses, these pheromones are turned into electrical signals inside the vomeronasal organ.

So, if your snake is male, this could be why he’s so active. If your snake has recently reached sexual maturity, this might be the first time you’re seeing this behavior.

But if your snake is female, it’s unlikely that she’s searching for a partner. When female snakes are ready to mate, they release sex pheromones that attract males. They go about their usual business and wait for male snakes to come to them.

Snakes have extremely specific temperature and humidity requirements. These are different for each species of snake, depending on their natural habitat. For example, tropical snakes (e.g. ball pythons) require higher temperatures than temperate snakes (e.g. corn snakes).

If your snake is moving around a lot, this could be a sign of something amiss with its environment. It could be too cold, and attempting to find somewhere warmer. Alternatively, it could be too hot, and trying to find a cool spot.

Take note of whether your snake is moving around primarily at the cool or warm end of the vivarium. This should give you a clue as to what the problem is.

Humidity (atmospheric moisture) could also be an issue. A snake that is burrowing in its substrate may be trying to find groundwater. Or, it could be trying to get closer to its heat mat.

Stress due to a lack of space can cause snakes to be more active than usual. If your snake’s vivarium is too small, it may be trying to escape and find a bigger place to live.

It’s a common misconception that snakes grow to the size of their tank. According to Cold Spring Harbor Perspectives in Biology, snakes grow constantly throughout their lives. This means that you will periodically need to upgrade your snake to a larger vivarium.

Ideally, your snake’s enclosure should be roughly as long as your snake’s body. If it’s any smaller than this, your snake may feel cramped, and constantly try to escape. If your snake is searching around the edges of the vivarium, or investigating the door, this may be why.

If you can’t upgrade your snake’s vivarium right away, try to allow your snake out for exercise occasionally.

Wild snakes, when they’re not hunting, spend lots of time hiding out of sight. Depending on the species, they may spend time in animal burrows, caves, under bushes or in the ground. In captivity, snakes need at least one appropriately sized hide box to feel secure.

If your snake hasn’t got an appropriate hide, it will roam around searching for one. This can cause considerable stress for your snake. It may also refuse to eat, hiss or strike at you in self-defense.

The hide box should be just big enough for your snake to curl up inside. If your snake has stopped using its old hide, it may have outgrown it.

If you’ve recently given your snake a new hide, it may be too big. Snakes prefer to feel snug and secure.

To help your snake feel as secure as possible, keep its vivarium cluttered. There should be lots of objects to curl around, in or under.

Is My Snake Bored?

If your snake is slithering in circles around its vivarium, you may wonder whether it’s bored. While snakes can’t feel boredom as acutely as more intelligent animals, they do need some enrichment.

Being reptiles, snakes have primitive brains. They don’t need mental stimulation as other types of pets do. Toys, puzzles, and other forms of entertainment are lost on snakes.

That being said, snakes may feel stressed if their environment doesn’t mimic their wild habitat. This stress may seem like boredom. Aim to provide your snake with the types of stimulation they’d have in the wild.

For example, hognose snakes are burrowers. In the wild, they dig tunnels in sand and dirt. So, you should give your hognose snake sufficient substrate to burrow in. Arboreal (tree-climbing) species, such as green tree pythons, should have lots of vertical space to explore.

Provide your snake with plenty of objects to climb on, under, and around. Natural objects, such as branches and rocks, work best. Try a mixture of substrates to provide different scents and textures.

If your snake still seems stressed or bored, it may be sick. A veterinary examination will help to put your mind at ease.