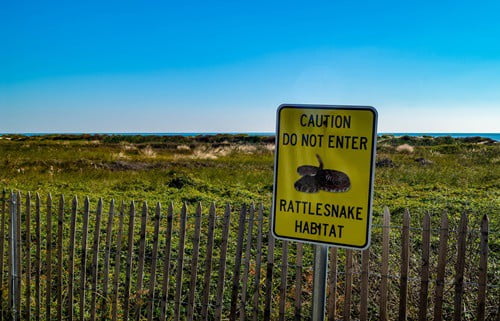 Texan rattlesnakes, and all other species of snakes, start to emerge as soon as it gets warm outdoors. It’s then snake breeding season in Texas. So, knowing when snakes are most active is vital for the safety of everyone.

Snake season in Texas begins in late February and early March. Venomous Texan rattlesnakes, copperheads, cottonmouths, coral snakes, and non-venomous snakes come out to feed and breed. Spring is mating season, which is when snakes are most active in Texas.

Texas snakes are active for much of the year because of the state’s warm climate. But it’s during mating season that the snakes are most aggressive and should be avoided. That’s why you need to know what time of day snakes come out to feed, and where you’re most likely to find wild snakes.

Is There a Snake Season in Texas?

Snakes hibernate (or ‘brumate,’ as hibernation in reptiles is called) for different reasons. All snakes are cold-blooded, so each snake needs the heat of the sun to stay alive.

Without heat, snakes can’t digest food, wouldn’t have the energy to move, and would freeze to death. This means that for a good portion of the year, snakes are less active and less obvious when it’s cold outside.

What this means is that snakes follow a yearly cycle of activity. This cycle is predictable and is common to snakes of different species. That’s why there is a snake season in Texas.

When Do Snakes Hibernate in Texas?

To figure out when snake season starts in Texas, you have to look at the year as a whole. In this example, we’ll start on the first day of the year. What are snakes doing on January 1st?

Snakes brumate during the cold winter months. Brumation is a process similar to hibernation, so the snake’s activity is limited. During this time, they won’t:

As a rule, they will begin winding down and becoming less active between September and December. The precise date depends on the weather in your area. So, on January 1st, the snakes will likely be hiding away in their dens.

If the temperature, either during day or night, dips below freezing then the snakes can’t survive. So, if your Texan town or city experiences a particularly mild fall, brumation will occur later because there’s no need for snakes to become inactive.

In the same way, a freak cold snap could mean that snakes begin brumating earlier. They will then stay in ‘inactive mode’ until the spring, when the weather starts improving.

When Is Rattlesnake Mating Season in Texas?

The mating season of all snakes that brumate, including rattlesnakes, begins in the spring. This is when the snakes finish their brumation. They will immediately need to begin feeding, because they will not have eaten for months.

At the same time, the snakes will seek out a mate. Males are drawn to females by their pheromones. Frequently, more than one male will find a female at the same time. They will have to fight to win the right to mate.

The snakes won’t hurt one another seriously. Rather, each snake will try to pin the other down in a display of dominance. Neither snake will use its fangs or venom.

Why is the snake mating season in Spring and early Summer? Because it allows the female to lay her eggs at the safest time of year. Eggs are highly susceptible to temperature and humidity changes.

Rattlesnakes don’t lay eggs, but the basic principle is the same. Three months after they mate, the eggs will hatch inside the body of the female. They will then come out as if the female is giving birth.

‘Giving birth’ at this time gives the babies a few months before the colder seasons. This gives them lots of time to eat before they have to brumate. If they were born immediately before the fall and winter, they wouldn’t be able to digest as it’s too cold, and would soon die.

When is Rattlesnake Season in Texas?

Rattlesnakes are most active during the spring, i.e. when they’re mating. Both males and females are on high alert during this period because they want to mate. They also hunt frequently to get their strength back.

Mating season is when you can expect to see the most snakes in Texas. The same holds true across all the southern states that share a similar climate.

Rattlesnakes will start emerging from their hiding places in late February and early March.

They will then be actively hunting and mating throughout spring. Many species become less active during the day in the summer to avoid the heat. So, while it’s still rattlesnake season in Texas, you may not see as many.

When Is Snake Season Over in Texas?

The end of snake season in Texas is the fall. This is when snake season ends all across the south. It’s at this time of year that the temperatures fall enough that snakes become vulnerable.

After months of mating, snakes will have less to do. They fill their time with feeding and keeping warm. They stock up on food throughout the Spring and Summer so that they can regain weight, and become big enough that they survive the winter.

The sign that it’s the end of snake season in Texas is when the temperature drops sharply. This could be during the day, or the night, it doesn’t matter. When temperatures hit freezing, snakes need to go into hiding.

Naturally, the precise timing of this seasonal change varies every year. Sometimes it’ll be in the early fall. Sometimes Texas will have a warm, sunny fall that means snakes can stay active for longer.

You also have to account for the many different habitats on offer in the state. Scrubland offers lots of cover for snakes, so they avoid the worst of the elements anyway. But out in the Chihuahuan Desert covering most of west Texas, the nights are cold because of exposure.

Aside from that, lower elevation areas experience warmer temperatures than higher elevations like hills and mountains.

All of this is to say that the end of snake season comes in fits and starts. There’s no single date on which it occurs. It varies depending on the habitat and type of weather in that season each year.

What Time of Day Are Snakes Most Active in Texas?

Another factor you have to consider is the time of day you’re out. Snakes are aware of the temperature changes over the course of a day.

Different snakes adapt to conditions differently. Some snakes like a lot of heat, but can’t handle night-time cold. Other snakes don’t like the heat, but don’t mind the cold. This gives rise to snake species with three different forms of behavior:

Rattlesnakes are adapted to most kinds of behavior. They have reasonably good eyesight, meaning they can see well during the daytime. But they also have heat pits, which are tiny sensors that detect the warmth of prey.

This means they can hunt in low light conditions and even at night. However, not all snakes have this adaptation.

Are Snakes in Texas Most Active in the Day?

Texas is home to each of these kinds of snake. You’re likely to encounter snakes any time of the day or night if you’re exploring.

Coral snakes and the aptly-named Texas night snake are nocturnal, for example. They have learned how to hunt at night with good night vision. Rattlesnakes can also hunt at night with their heat pits. Most of the other snake species are either diurnal or crepuscular.

Snakes will also change their behavior at different times of the year. Some rattlesnakes will be diurnal during spring and fall, for example. The Western diamondback is one type. But during summer, they may become nocturnal or crepuscular to avoid the daytime summer heat.

Given that there’s a definite snake season, knowing about it can help you to stay safe. To keep safe, you should follow this advice:

Are There Protected Snakes in Texas?

The Texas indigo snake is listed as threatened in Texas, so they cannot be legally hunted or killed. It’s a subspecies of the Eastern indigo snake, which is protected in many parts of its range.

Aside from that, all snakes are fair game. Rattlesnakes are not protected by law in the state of Texas.