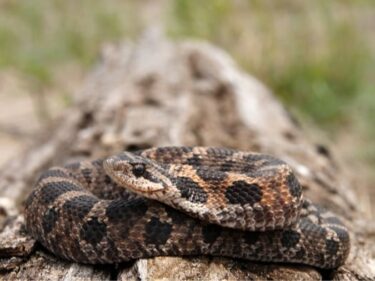 The hognose snake is so popular in the pet trade that it now rivals ball pythons and corn snakes for dominance. Breeders have spent years meeting this demand by carefully breeding ever-more stunning hognose morphs. There are now almost 60 morphs available.

One of the best hognose morphs is the anaconda morph. This makes a hognose look like a tiny anaconda. The reduced pattern is often cross-bred with other morphs for even more visually stunning snakes. Morphs, like the anaconda, albino, and snow, are created through generations of careful breeding. A morph itself is a genetic trait that is a by-product of a mutated gene. The owner of this gene passes it onto its offspring as a mutated allele. Thus, a new morph is created.

There are a handful of beautiful hognose morphs that outshine the rest. Snow, lavender, and moonstone morphs are some of the most attractive morphs around. Unfortunately, their beauty is matched by their high prices.

What Are Hognose Morphs?

Morphs naturally occur in the wild. However, designer morphs are created through selective breeding in captivity. There are currently almost 60 hognose morphs, with breeders creating more every year as demand and competition increases.

There are 4 distinct types of hognose snake. Of these, the western hognose is much preferred by breeders and owners. This is due to its willingness to eat rodents. It also has a more docile temperament.

Western hognose snakes have an upturned nose and heavy-build. Wild and basic western hognose snakes can be found in shades of brown and tan with yellow or orange undertones. As it is a ground-dwelling snake that burrows, it survives by blending in with leaf litter, earth, and stone.

Western hognose morphs may be found in the wild. However, survivability decreases when the snake is unable to camouflage and hide from predators. This is why we rarely see a brightly-colored hognose snake in the wild. It gets picked off by predators before it can pass on its genes.

How Are Morphs Created?

Baby snakes inherit genes from their parents for physical appearance. Every genetic trait is determined by a set of alleles on a chromosome, and each parent donates one chromosome and one allele to its offspring. Morphs are created through mutated alleles. Mutations are passed on to offspring as either a dominant trait, a recessive trait, or a co-dominant trait.

Breeders will pair snakes with the desired traits to produce morphs. This may take several generations of careful breeding.

The anaconda morph, also called a conda morph, is a co-dominant gene that results in a reduced pattern. A hognose with this morph will also have black belly scales with white walls. As the name suggests, the anaconda pattern looks similar to the circular splotches of the enormous anaconda.

Anaconda morphs can come in a variety of colors. Snakes with this morph are often interbred with other morphs to create even more beautiful variations. The price of a hognose with an anaconda morph will depend on what, if any, other morphs it has inherited or shown.

Anaconda morphs are widely available and are one of the cheapest morphs.

Breeding two anaconda morphs together result in a super anaconda. This is a hognose with no pattern except for the splotches on its head. This is what happens with co-dominant traits.

Axanthic snakes are those that lack a yellow or red pigment to their scales. This means that an axanthic anaconda would have no pattern and have scales that are black, white, and grey. Some axanthics can even look silver.

Snow hognose snakes are made by pairing an albino with an axanthic. These snakes are largely white with pink and yellow undertones and vivid red eyes. Snows still have visible patterns, although they are quite pale and may fade as they grow. Super anaconda snows will have no patterns at all.

Snow morphs aren’t all that common, but are highly sought after. This is reflected in a heftier price.

This morph results in pale purple scales, darker purple blotches, and dark eyes. Even the belly scales and tongue can be lavender. The colors will darken as a baby hognose grows, too, increasing the lavender pigmentation.

Lavender morphs are popular for their unusual coloring. Plus, this morph is being used to breed quite a few other lines of visually stunning snakes. A lavender will still be somewhat difficult to come by. However, lavenders are one of the more affordable exotic hognose morphs.

A hognose with the coral morph comes from breeding an albino hognose with a lavender hognose. The baby will be in pale shades of pale pink and purple.

The albino hognose is popular with breeders. Albinism is, as most people know, a recessive gene that vastly reduces the amount of melanin pigment in the scales and eyes of snakes. In hognose snakes, albino traits result in white, yellow, and orange scales and pink eyes. Albino morphs are often used to enhance other morphs and create two-trait snakes.

Albino morphs are naturally found in the wild. Albinism is one of the few morphs that was not a result of selective breeding in captivity.

As stated by Texas State University, albinism itself has been observed in almost every vertebrate animal on earth.

Albino morphs present themselves in varying colors. Some will appear more red, others more orange, others more yellow. Albino hognoses that are more pigmented in one color are often labelled an ‘extreme’. They are also slightly more expensive than a basic albino morph depending on availability.

Moondust hognoses are created by pairing an arctic hognose with a lavender hognose. The result is a beautiful white hognose with lavender undertones and black edging around its blotches.

The arctic morph is a co-dominant gene and varies slightly from the axanthic gene. An arctic hognose has black outlines around its blotches. A super arctic has jet black speckles between its scales and darker edging.

The moonstone morph is born by matching a super arctic with a lavender. A moonstone hognose will be primarily white with pale grey patterns and very pale lavender undertones. In the right light, this snake will look like its namesake.

This gene creates hognose snakes without darker pigments. A toffee belly hognose will have a caramel-colored belly and pale brown, cream, and tan scales. It is quite common to see anaconda morphs cross-bred with toffee belly morphs.

These beautiful hognoses are quite popular and can be bought from multiple breeders. One will cost slightly more than basic anaconda morphs.

The candy morph is a sweet result of pairing super anaconda hognoses with toffee belly hognoses. Almost all candy morphs will have pale caramel colored scales, with slightly darker scales along the spine.

Quite by accident, the jaguar morph was discovered. Jaguar hognoses have ‘broken splotch’ patterns, similar to those of jaguars. Typical of this morph are prominent yellow and green pigments, which are not seen that often in western hognose snakes.

There were no jaguar hognoses for sale at the time of writing.

Sable hognose snakes are those where the darker colors are more prominent. This morph results in hognoses with prominent black splotches and dark brown scales. Some sables retain red colors, differentiating them from true axanthics.

Axanthic snakes are those without red or yellow pigments. Breeding an axanthic hognose with a sable hognose results in a truly beautiful, dark hognose with a black nose and belly.

Western hognose snakes are naturally found in shades of brown, yellow, orange, and red. Selective breeding has resulted in an extreme red morph. This morph, you guessed it, results in snakes with exaggerated red pigmentation. Extreme reds rarely have black scales, asides from the belly.

An extreme red albino is an albino hognose with the red pigment turned way up. This snake will have bright red eyes. A picture of this stunning hognose will often look like it has been photoshopped because of how vivid the red tones are.

A morph is not a genetic defect. It is a mutation. Morphs are strictly visual traits that impact patterns and colors. However, it seems that artificial breeding does sometimes result in desirable traits being paired with true defects. This can be because inbreeding is occasionally performed to refine desirable morphs.

Essentially, all morphs originate with one snake having a mutated allele. If that snake also had some sort of defect, such as a genetic neurological issue, it could be passed on alongside the mutation. Inbreeding can exacerbate such an issue and increase the chances of that gene being passed on.

This is a controversial topic. At the moment, arguments are centered on the spider ball python morph, although the pink pastel hognose morph is being mentioned as well. These arguments focus on the ethics of breeding these morphs, which have proven neurological issues, among other things, paired with them.

Breeders did attempt to separate the recessive gene responsible for the pink pastel. None had great success. As noted in the Journal of Exotic Pet Medicine, there is growing professional awareness of these issues.

Why Are Snake Morphs So Expensive?

Given that you can buy a regular hognose snake for under $80, the high prices of the above morphs may have shocked you. The thing is, morphs are special. The bulk of them require careful breeding. Some breeders have been working with their lines for years to create certain morphs.

Essentially, the rarer or newer the morph, the more expensive it will be. Exotic morphs aren’t cheap. But, you can find hognose morphs for cheaper prices at reptile expos.

Selective breeding has produced some of the most visually attractive morphs on the market. From the glorious snow, to the distinguished sable, to the sweet toffee belly, hognose morphs have diversified into a broad spectrum of colors and patterns.

Find out how to care for hognose snakes in our complete guide.