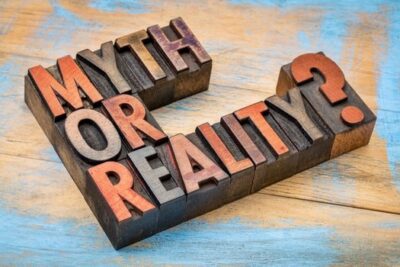 How much do you really know about snakes? You’ve probably heard so many different things about our serpentine friends as they are the subject of many myths and misconceptions. Many of the “facts” that are spread about snakes are, in fact, completely erroneous.

We’re going to debunk the most comm myths about snakes. We’ll examine what the myth says, why it isn’t true, and where it may have originated.

One of the stranger snake myths is the legend of the hoop snake. Stories of this creature often appear in tall tales, such as stories about Pecos Bill, but a lot of people believe that these old stories describe a real creature.

According to the legend, the hoop snake is an extremely dangerous reptile. It chases its prey by grabbing its tail in its mouth, forming a hoop with its body, and rolling along the ground at high speeds. Then, when the hoop snake catches up with its victim, it will use the sharp stinger at the end of its tail to make the kill.

However, hoop snakes do not actually exist. According to the Journal of Integrative Biology, the hoop snake legend may come from people who observed mud snakes. Mud snakes do have a sharp tail which they can use in self-defense. When threatened, this snake will curl into a sort of spiral shape, using its tail to protect its head.

This position makes the snake look a bit like a hoop. But mud snakes do not form a hoop with their body, and they do not roll towards people to attack them. Like most snakes, they would much rather avoid conflict.

Other versions of this myth say that the mother snake will carry its babies around in her mouth until they are large enough to fend for themselves.

Baby snakes must be ready to fend for themselves almost immediately after birth. Fortunately, they can get their first meal from the lining of the egg they just hatched from. Within a few days, baby snakes are slithering around with just as much strength as any adult snake.

There is a long-standing myth that constrictors are suffocating their prey. According to this legend, being killed by a constrictor is a slow, torturous death. However, this is not the case.

A boa constrictor does not have the time to wait for its prey to suffocate. It is in a hurry to get a meal, and suffocation is a long process. A boa constrictor wrapped around a rat is not cutting off the rat’s ability to breathe. Instead, it is blocking the flow of blood to the rat’s heart. This causes the rat to have a heart attack, a much more efficient way for the snake to kill its prey.

Being attacked by a boa constrictor is a common fear for people. However, since humans are much bigger than the constrictor snake’s usual prey, the snake is unlikely to try to use this strategy on us.

If you do ever find yourself in the unlikely position of having a ball python or boa constrictor wrapped around your arm, remain calm. Do not grab at the snake and try to tug it off as this may make the snake nervous. Instead, gently hold the snake’s tail and slowly unwrap it from your body.

Many snakes eat food which is much bigger than their own heads appear to be. This has led to a common myth that in order to get its mouth around its meal, a snake will dislocate its jaw.

While snakes can open their mouths much more widely than you would expect, this is not because the snake has dislocated or detached the bones of its jaw. Instead, the snake makes use of its extreme flexibility.

The lower jaw of a snake is actually two separate bones, each known as a “mandible.” These two mandibles are held together by a stretchy ligament, around where the snake’s chin should be. When the snake opens its mouth, the ligament stretches, giving the snake the ability to wrap its jaw around its larger prey.

What’s more, the snake is able to move each mandible separately from the other. This allows the snake to work its way down the body of its prey, slowly swallowing it.

So the rumor goes, baby snakes have not yet learned how to control how much venom they will inject. Therefore, the snakes will inject more venom than strictly necessary.

There is no scientific evidence to back up this claim. People bitten by juvenile snakes and adult snakes are envenomated with similar rates. Also, venom milked from younger and older snakes has the same potency.

What is true is that in some species of snakes, the kind of venom that the snake produces changes over its lifetime. Researchers at the University of Queensland discovered that juvenile Australian brown snakes have venom which targets its prey’s nervous system – a neurotoxin. However, adult brown snakes have venom which targets the prey’s circulatory system – a hemotoxin.

According to legend, snakes are deaf. This misconception likely comes from the fact that snakes do not have visible ears. What’s more, snakes lack eardrums, so for a long time even scientists believed that snakes did not have the ability to hear airborne noises at all.

The truth is that snakes do hear – just in a slightly different way. Sound is made from waves in the air which vibrate bones inside of the animal’s head. Though they do not have an outer ear to catch soundwaves with, snakes still have inner ears connected to their jawbones.

The snake can sense vibrations in the ground with their jawbones, just like any other soundwave. These vibrations are picked up by the jaw and transferred to the brain, which translates the sound into an image. The snake can use the information they heard to determine how big or how close another animal is to them, and whether it might be predator or prey.

Snakes are also able to pick out low-frequency sounds from the air around them even though they do not have an outer ear. The snake’s entire skull will vibrate along with lower frequencies, allowing the snake to hear.

They are not as well attuned to higher-pitched noises, however. While snakes are not deaf, their range of hearing is not as wide as other animals.

Snakes are reptiles, and it is common knowledge from elementary school science class that reptiles lay eggs. This leads to the common misconception that all snakes are oviparous, which means that they lay eggs.

The truth is that many snakes carry their young inside their body throughout gestation, and then they give birth to live snakes instead of eggs. These snakes are viviparous animals.

According to the Animal Diversity Web, puff adders are an example of a viviparous snake. The snake will be pregnant for anywhere between 136 and 159 days – around 5 or 6 months. They can give birth to between 20 and 40 offspring at a time.

There are also snakes that are known as ovoviviparous, or snakes which give partial live birth. This snake does develop eggs for its young, but it carries its eggs inside of itself rather than laying the eggs in a nest. After the snake gives birth, it does not provide care for the young. Whether they hatch from eggs or are born live, baby snakes must fend for themselves. Other viviparous snakes include the following:

Snakes Can Charm Their Prey

In animated films, snakes have the superpower to hypnotize their prey by looking deep into their eyes and swaying back and forth.

Fortunately for us, this is not an ability you will ever see demonstrated in real life. This myth may come from people observing prey animals standing stock-still in front of an approaching snake. The truth is likely that the prey was frozen with fear and trying to figure out which way to escape.

According to an old wives’ tale, milk snakes sneak into barns at night and suckle at the udders of cows. This story likely comes from how milk snakes are commonly found inside barns, where cows are kept.

However, this story might make you raise an eyebrow when you remember that reptiles cannot digest dairy products. It also seems very unlikely that a cow would stand still as a snake bit onto its udders.

The truth is that milk snakes come to barns in order to hunt the rats and mice which live there, not to drink milk from cows. This makes these snakes a welcome sight to a farmer’s eyes, as it keeps rodents away from the farmer’s crops.

People who hate snakes often refer to them as slimy or yucky, a damp and slippery creature that you would not ever want to touch. Admittedly, if you come across a snake in the wild, you should not try to touch it. But this is because you do not want to get bitten, not because the snake is unpleasant to feel.

In reality, snakeskin is neither damp nor slippery. A snake’s skin is dry. Being too wet would not be healthy for the snake. Most of the snake’s scales are smooth, while some snakes have a slight roughness to the edges of their scales. Many people find the feeling of snakeskin quite comfortable and pleasant to the touch.

Now you know the truth about these snake myths and legends. The next time you hear one of these common misbeliefs, you can impress all your friends with your new knowledge of snakes.